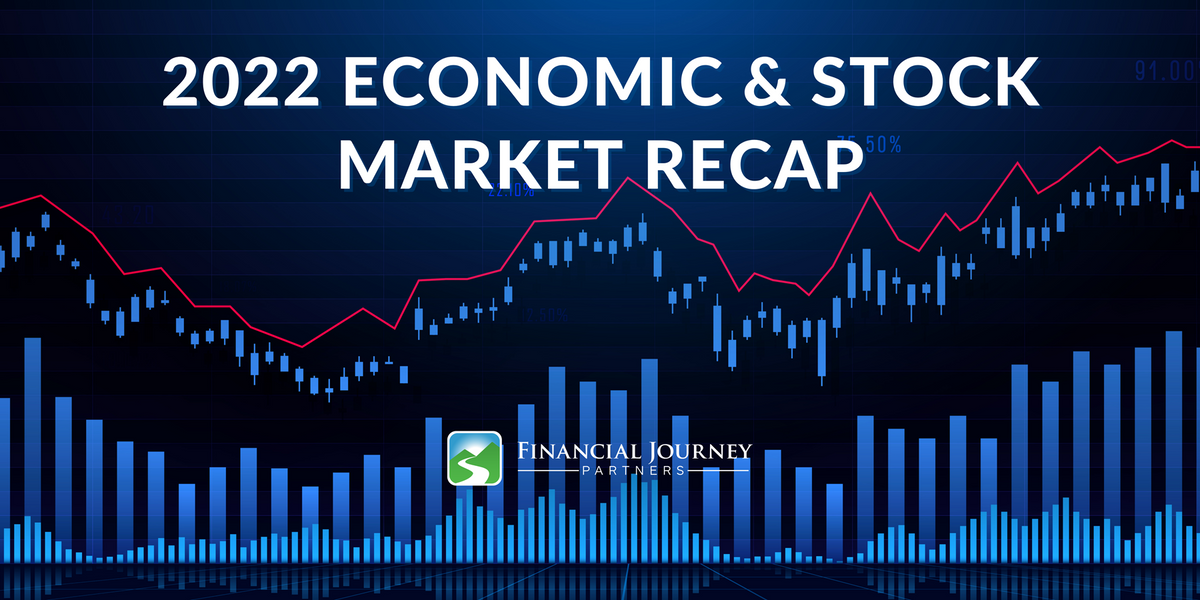 2022 has been a challenging year in many ways for investors. It was a difficult year for stocks, with the S&P 500 dropping 27% to hit a low on October 12, 2022. There were three rallies over 10% - yet so far, after each rally, the market has turned down to reach new lows. In the blog below, we will share our recap of the year and our thoughts as we exit 2022.

Sign up for our email newsletter for views of the economy, stock market, and top news stories from our Wealth Managers at Financial Journey Partners.

Working off the Excesses

The result has been a stock market that has gone up steeply in the past few years. 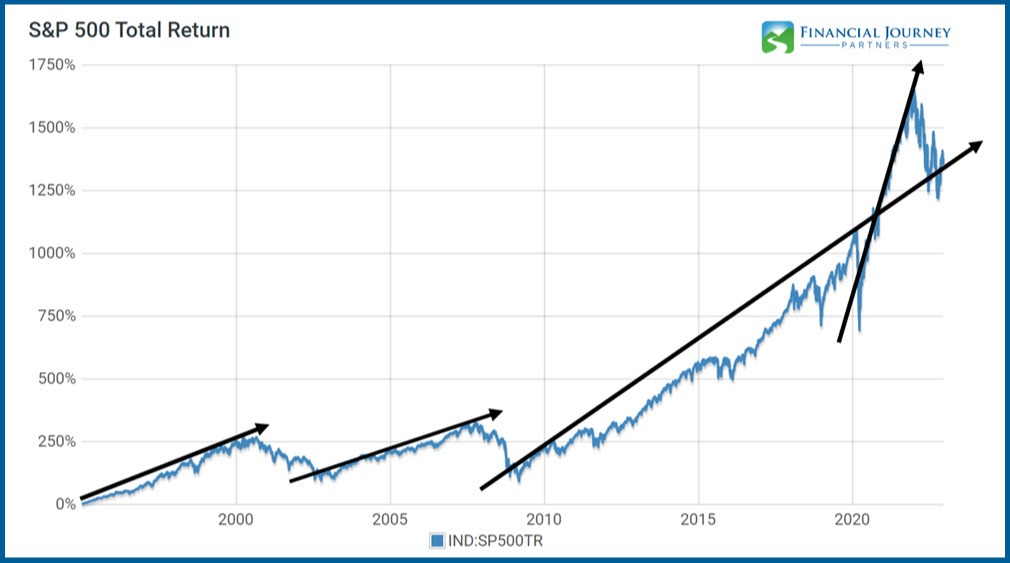 We think 2022 and next year, in 2023, will be the time when the economy and stock market shake out the excesses and revert to longer term growth trend lines.

In December 2022, the Bureau of Labor Statistics released the Consumer Price Index for November 2022.

Over the last 12 months, the “All Items” index increased by 7.1%, before seasonal adjustment. That is a decrease from 7.7% the prior month. Falling energy prices were a big contributor to the decease of the “All Items” number.

The “All items less food and energy” has fallen back to the levels in January 2022, so it is unchanged during 2022. The Federal Reserve has stated that their target is to get inflation down to 2%. There is still a long way to go to get to that level.

On December 14, Federal Reserve Chairman Jerome Powell, announced at his press conference that the Fed Funds Rate would be raised by 0.50% to 4.25%. This is what was expected by analysts.

The Inverted Yield Curve Gets Worse

A reliable indicator of a pending recession has been the inverted yield curve which is calculated by subtracting the interest rate of the 2-year U.S. Treasuries from 10-year Treasuries.

During normal economic conditions, 10-year Treasuries pay a higher interest rate than a 2-year Treasury. This makes sense because investors normally expect to be paid a higher rate of return when they commit their money for a longer period, in a longer-term bond. 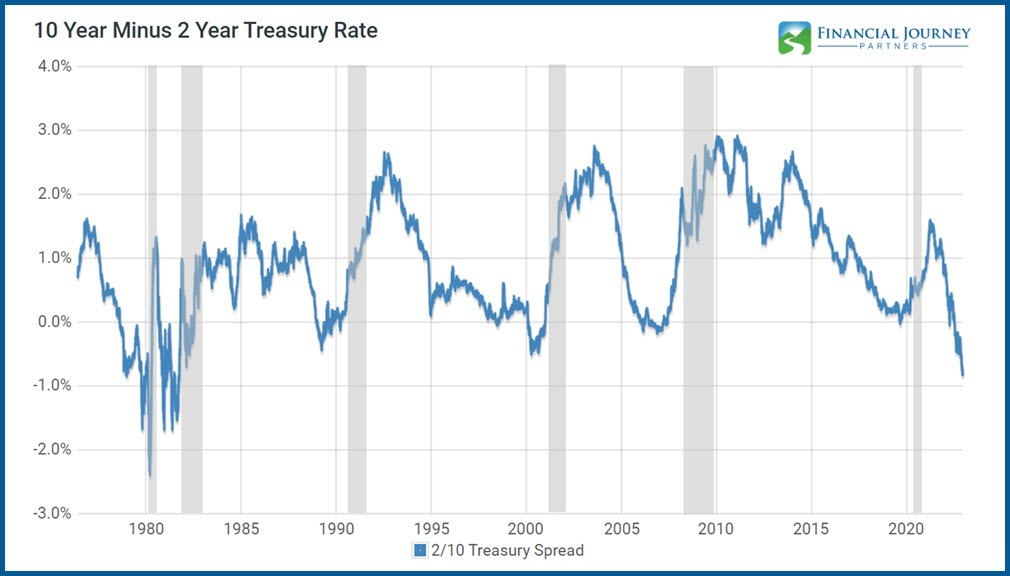 Many economists and investment firms are now calling for a recession in 2023:

A recession is foretold; central banks are on course to overtighten policy as they seek to tame inflation – BlackRock, December 20225

Recession in 2023 is now Vanguard’s base case – Market Perspectives: December 20226

A common feature of a bear market are rallies that can be surprisingly strong. 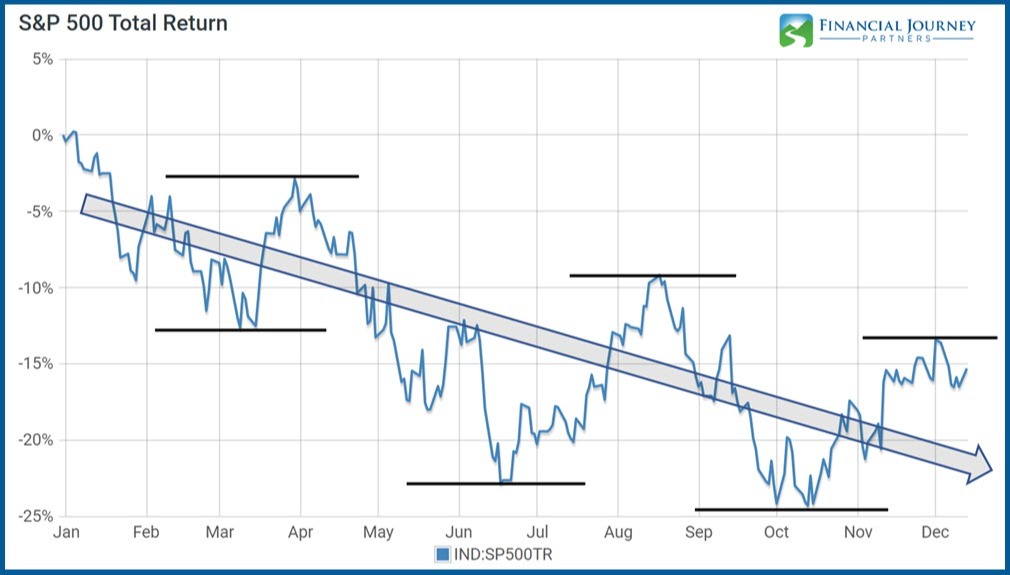 Volatility has been high, with the market moving up and down as much as 6-8% in a day. We think that in spite of the recent rally in October and November, the downtrend is still intact and if we get a recession in 2023, the market could continue lower early next year.

Where Do We Go From Here?

We remain defensive with client portfolios, since we think there is a high possibility of recession in 2023 and that could drive the U.S. stock market lower. A bear market is not a buy and hold kind of a market. But there are still opportunities, and we will make tactical moves to buy and sell where we see opportunities.

We have started buying bond funds for clients for the first time in almost a year. We plan to continue dollar cost averaging into bond funds over the next few months. The great news is the higher interest rates are providing higher yields in bond funds, which increases their return for investors.

We are getting closer to the end of this bear market. The valuation of stocks is becoming more attractive, with the stock prices of some of the largest companies in America down 50% or more. In some years, there is a stock market rally in December, called the Santa Claus rally. We hope Santa Claus has a gift (a rally) for the stock market this year. 😊

We have been in the financial business during the bear markets from the Dot Com Bust in 2000-2002, Global Financial Crisis in 2007-2007 and Global Pandemic in 2020. This experience has been extremely valuable to help us guide our clients through these challenging markets, and we know from experience, that these challenging markets also present opportunities. We think there will be some excellent investing opportunities in 2023 and we will be watching daily for them.

If you have questions on how the topics in this article could impact your portfolio, give your Wealth Manager a call.