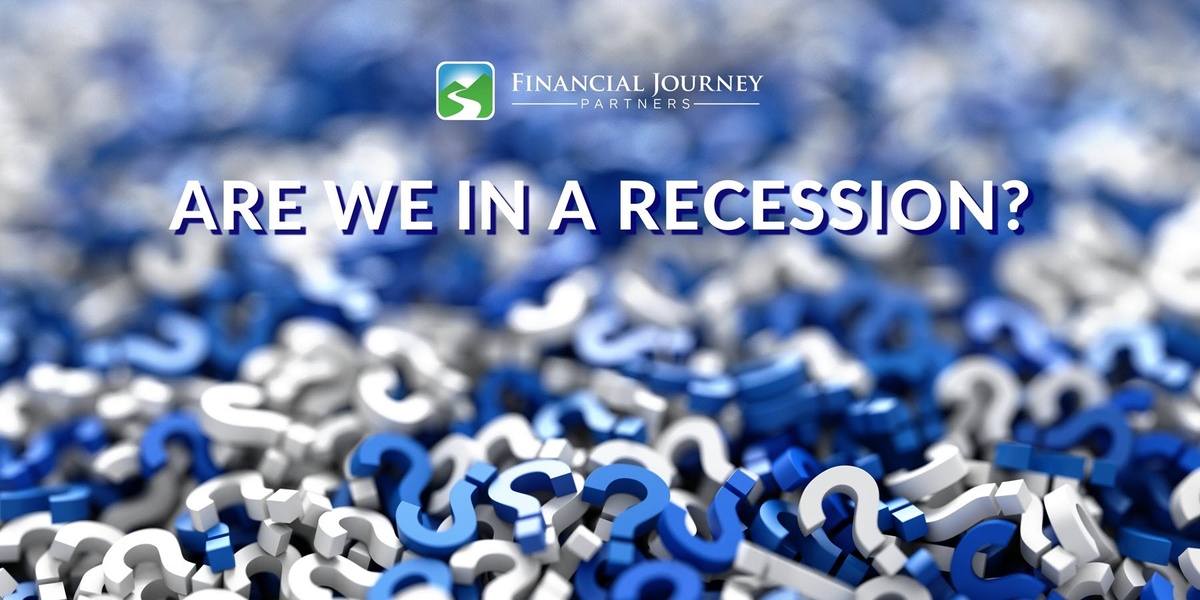 Are We In a Recession?

Sign up for our email newsletter for views of the economy, stock market, and top news stories from our Wealth Managers at Financial Journey Partners.

A good way to see the amount of stimulus from the Federal Reserve is to look at the size of their balance sheet to notice if it is increasing or decreasing.

When the Fed balance sheet is increasing, they are primarily buying government treasuries, which is called Quantitative Easing. The Fed is buying bonds to injecting money into the economy.

When the Fed balance sheet is decreasing, it is called Quantitative Tightening. The Fed is taking money out of the economy to slow it down. This is primarily done by letting treasury bonds expire and not purchasing new ones to replace them. 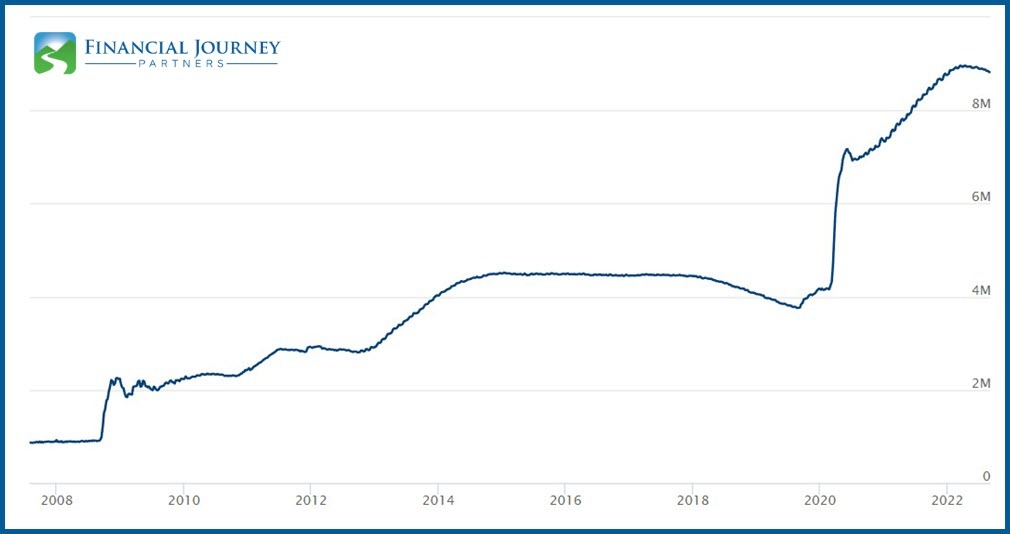 On June 1, the Fed began shrinking its balance sheet at a pace of $47.5 billion per month and on September 1, 2022, the pace doubled to $95 billion. People in the news often talk about the Fed rising interest rates, but rarely is the Quantitative Tightening discussed which can have a major impact on slowing down the economy.

Another way the Federal Reserve can impact the economy is by raising and lowering the Fed Funds interest rate. This is the interest rate for overnight lending among U.S. banks and impacts bonds of all different durations, including 30-year mortgages for homes.

The Fed Funds rate is currently 2.25% 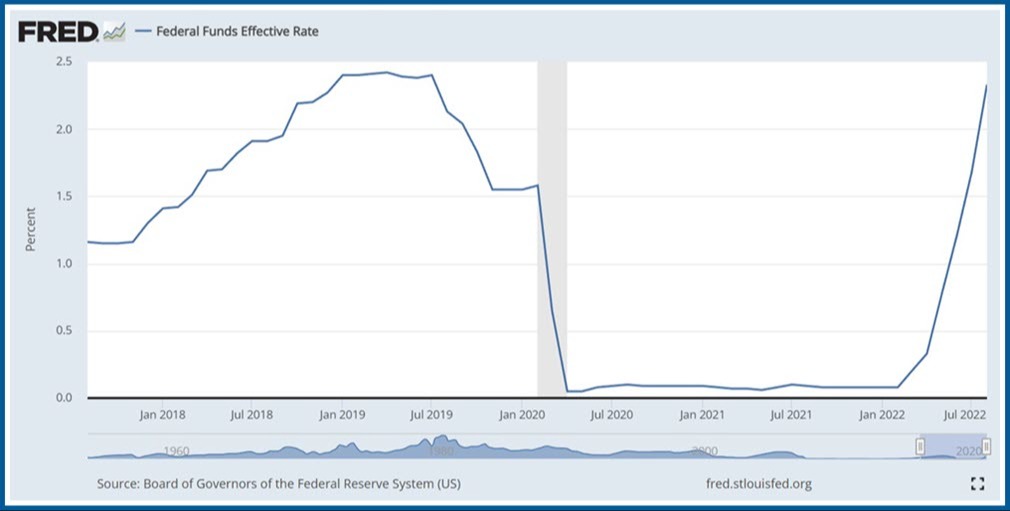 Another form of economic stimulus can come from the Federal Government, in new laws passed by Congress. Since the start of the COVID pandemic, there have been many stimulus bills created and sponsored by Democrats and Republicans.

Some of the major laws include the following:

The stimulus bills were intended to help the country through the COVID 19 pandemic. One of the things it did was to provide money to lower and middle-income people in the US through the form of checks sent directly from the U.S. Treasury Department to people’s checking accounts. We can see a significant increase in the personal savings rates in early 2020 and early 2021, just after stimulus checks were distributed from the very large stimulus bills passed in March 2020 and again in March 2021.

Congress has shown less interest in passing stimulus bills in recent months and we will have to see what affect changes in Congress due to the November election will have on future legislation.

The Impact of Stimulus on the U.S. Stock Market 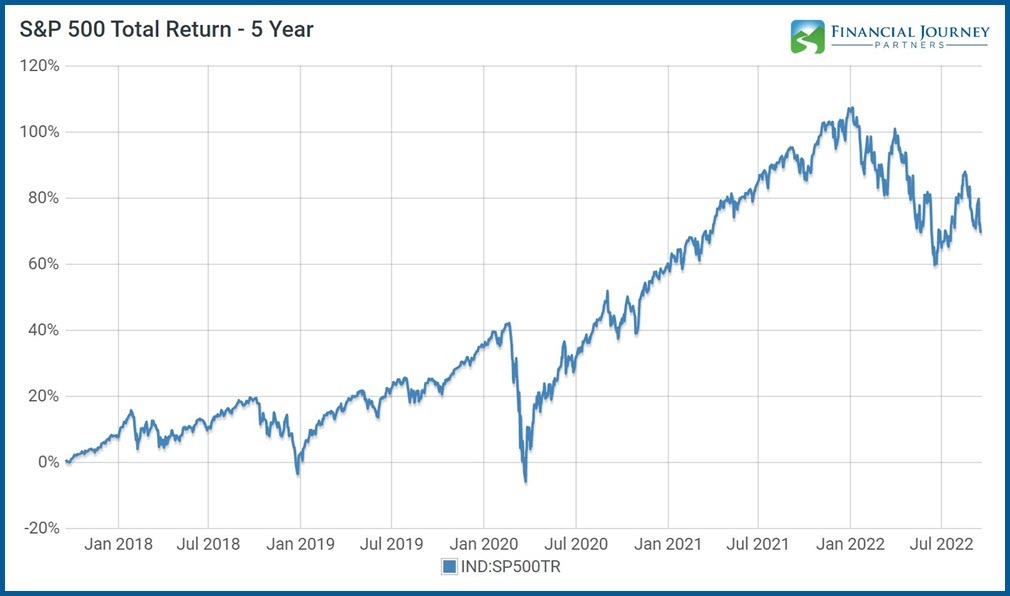 Next is the same graph, but with a line drawn from the points at the top of the market prior to COVID: 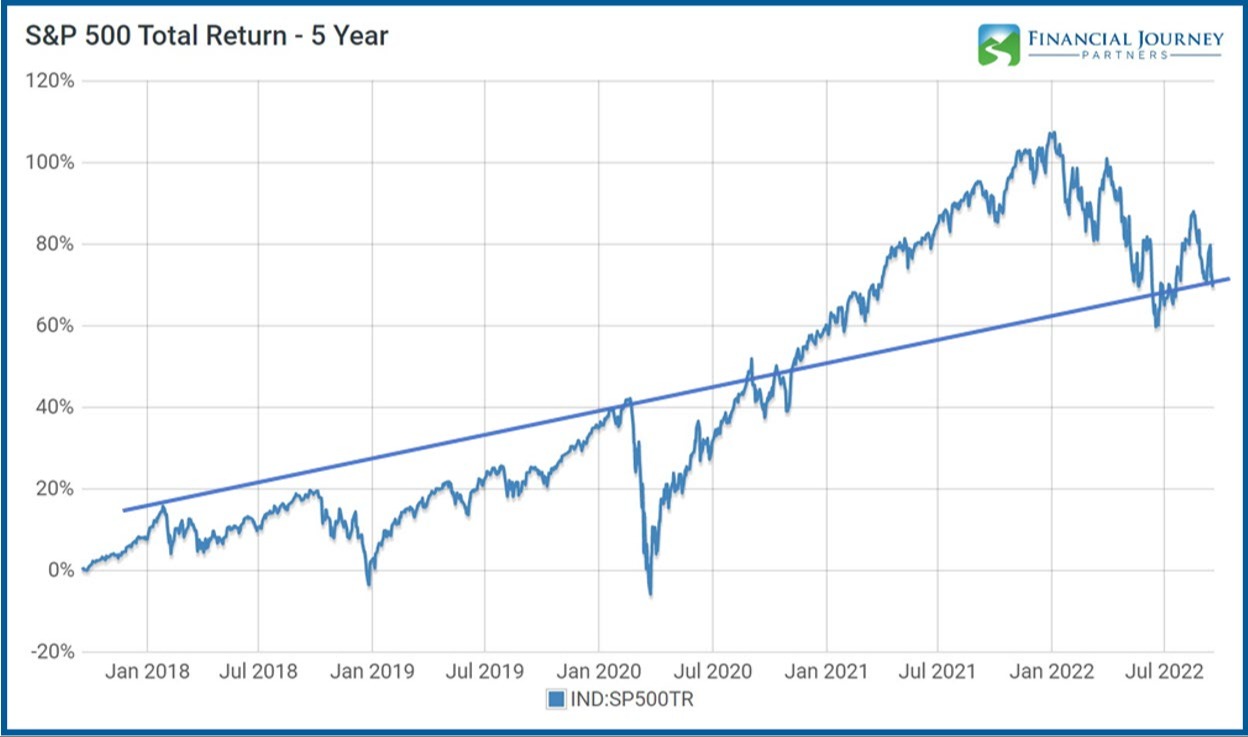 Notice the line ends in the same place as the current market. If there were never a COVID pandemic, might we have ended up at the same place in the market as we are today?

The same graph is shown below, but now a line is drawn to show the steeper rise of the market after the start of the COVID pandemic. So, let’s think about this for a moment. There was a worldwide pandemic, the economies of the world were shut down and the stock market started going up faster. Does that seem inconsistent? 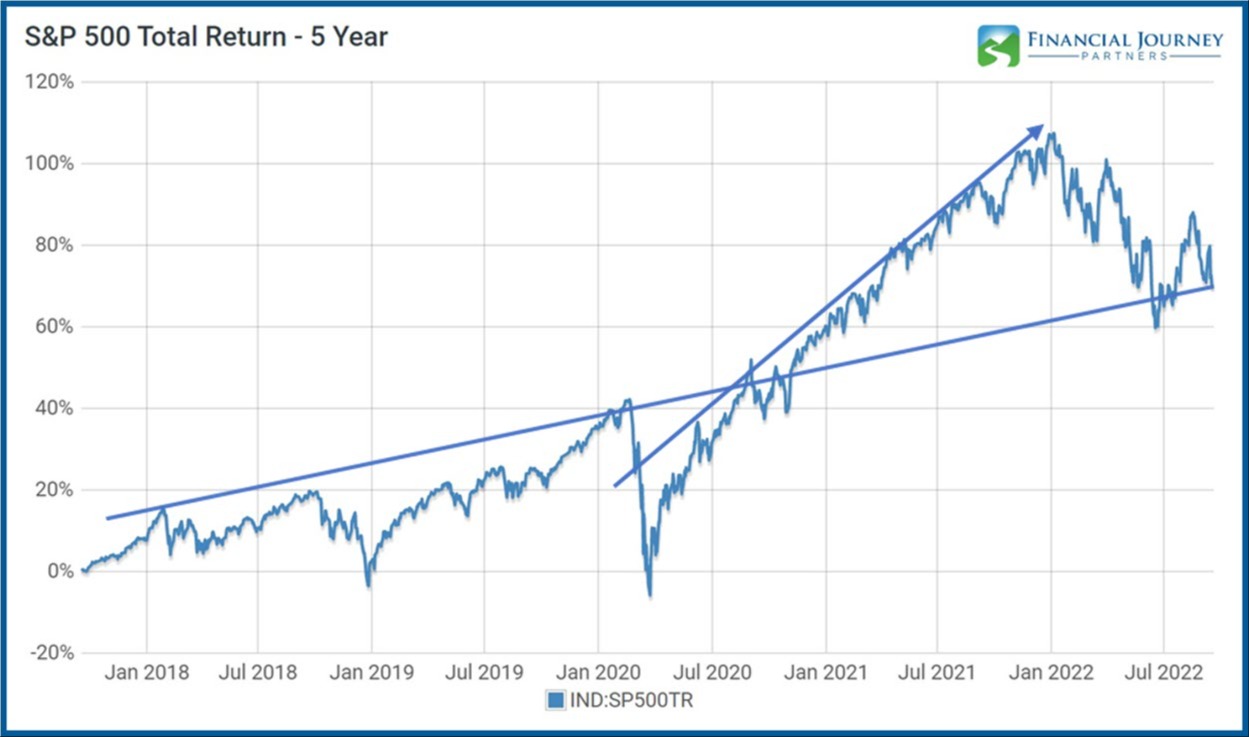 Remember that after the pandemic started, the Federal Reserve and the U.S. Federal government poured trillions of dollars of stimulus into the economy for two years. More recently, the Federal Reserve and U.S. Federal Government have stopped providing stimulus. And amazingly enough, the market came down to the same trend line that was in place before the pandemic and before all the stimulus programs. 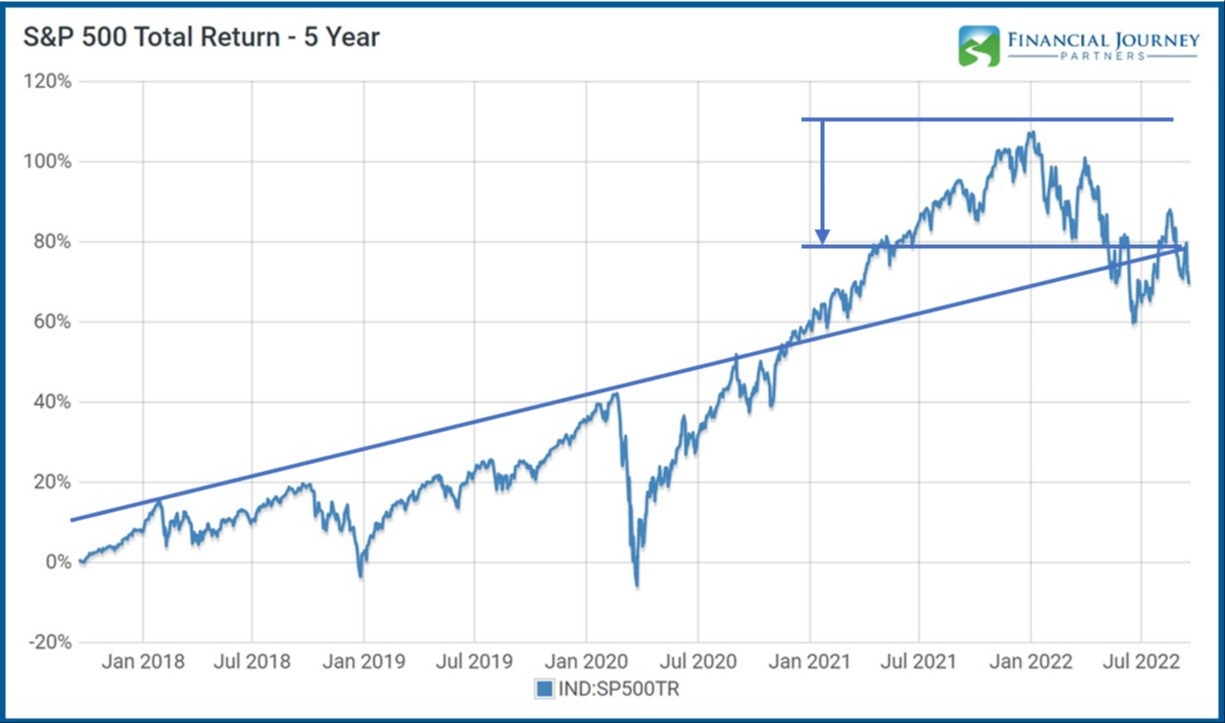 One way to look at the market is to say that the excess that was created during the pandemic, due to all the stimulus, has come out of the stock market after the stimulus was removed.

On September 13, the Bureau of Labor Statistics (BLS) reported that the Consumer Price Index for All Urban Consumers (CPI-U) rose 0.1 percent in August, on a seasonally adjusted basis after being unchanged in July. The “All items” index increased 8.3% before seasonal adjustment.

What Is a Recession?

A big question now is whether the Federal Reserve can increase interest rates enough to drive inflation down to their target of 2-3%, without causing a significant downturn that turns into a recession. Let’s start by looking at “What is a recession?”

A common definition of a recession is two quarters of negative GDP. The organization that officially determines if there was a recession is the National Bureau of Economic Research (NBER). They define a recession on their website (nber.org) as “a significant decline in economic activity that is spread across the economy and that lasts more than a few months”. Next, let’s look at where the economy is today.

For the last two quarters, the GDP growth rate has been negative, so it fits that part of the definition.

The Unemployment rate has not started rising in any meaningful way, but this is a lagging indicator that can take many months to rise after the economy starts to slow.

Are We in a Recession?

So, an important question many people are asking is “Are we in a recession?” In a statement on August 8, 2022, the Federal Reserve Bank of Dallas published an article titled “U.S. Likely Didn’t Slip into Recession in Early 2022 Despite Negative GDP Growth.

BlackRock has a 5-point dashboard to determine whether the economy is in recession. Lending Standards, Industrial Production and Small Business Optimism have deteriorated to the point of concern about recession. Unemployment rate and personal income have not yet declined, and they think it is a little early to state that we are in recession.

Fidelity has a Business Cycle Framework for the major economies of the world and the graph below shows the U.S. economy weakening, but not yet at the bottom. 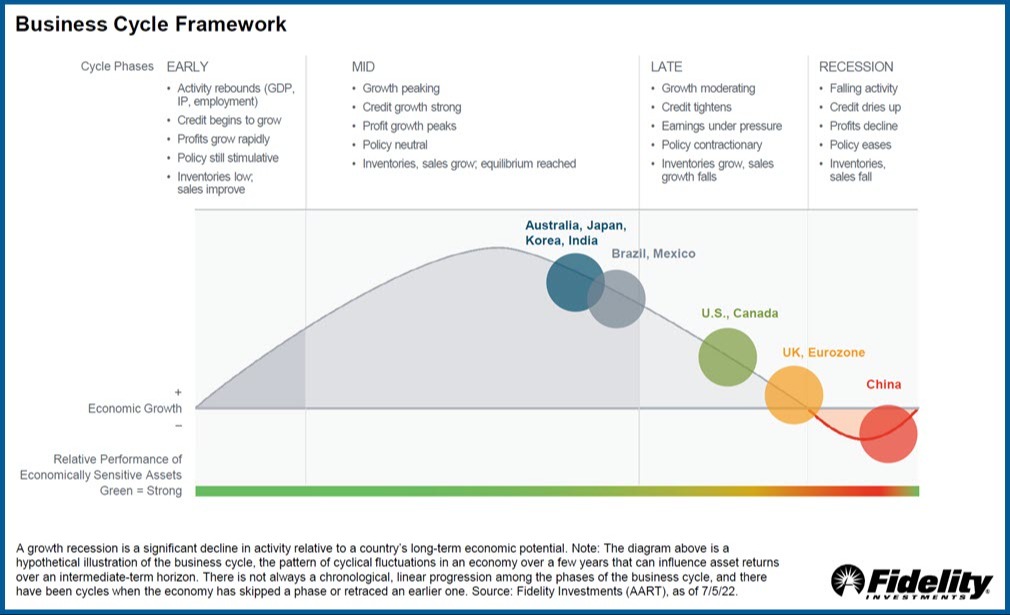 So, we will let you be the judge. Do you think the U.S. economy is in recession?

Regardless of the technical definition of a recession, we believe the U.S. economy will weaken from further rate increases by the Federal Reserve. We are starting to see clients, and people we know get laid off from their jobs. If we ask them, based on their personal situation, they may feel like the economy is in a recession. We are also hearing from employees at big tech companies in Silicon Valley that these companies are freezing hiring and cutting discretionary spending on things like marketing.

Where Do We Go from Here?

Over the past year, the U.S. stock market has sold off considerably, with the stock of some quality companies down 50, 60, 70 and even 80%. We continue to watch the market daily for opportunities as stocks are looking much more attractively priced than they were at the start of the year. We have added funds that are less volatile to provide a smoother ride through this volatile market. Stocks can recover more quickly so we prefer to reduce rather than eliminate stock market risks.

We still do not own any bond funds for our clients which continues to fall to lower levels. If the Federal Reserve continues to raise interest rates in the next few months, then we expect bonds to fall further. But we think that with the lower prices of bonds, and the higher interest rates they are paying, by year-end bonds could be at the most attractive point they have been in decades.

There was a possibility of the Federal Reserve slowing down the increase if inflation was coming down but after the report on September 13th, it doesn’t look like the risk to the bond market has reduced. Look for an update on the bond market in a blog soon.

We are watching the news daily to look for signs of a weakening economy and possible recession ahead and manage through this. We think that volatility will continue in the market for the next few months. Historically the last few months of the year, and the few months after a national election, are good months for the market and will continue to watch closely for opportunities.

If you have questions on how the topics in this article could impact your portfolio, give your Wealth Manager a call.

The information provided in this article are being provided for informational purposes only and should not be construed as a recommendation to buy or sell any specific securities. Past performance is no guarantee of future results, and all investing involves risk. Index returns are not reflective of actual performance nor reflect fees and expenses applicable to investing. One cannot invest directly in an index.