For decades we’ve lived in California and our firm is based in San Jose, CA. There has always been some amount of people we know that decided they had enough and moved somewhere else. But recently, the times seem different as we’ve noticed firsthand a significantly larger number of friends and co-workers that have decided it was time to leave Golden State.

Recently a significant number of personal friends, many who were born and raised in California, decided to move out of state. For example, we were getting our car serviced at the local dealership we’ve used for more than 15 years, where the same woman has been the Service Manager. She shared that the dealership has been installing more trailer hitches than ever before because so many people were moving out of state.

Next, while doing a routine visit with my doctor and without prompting, he shared that each week he has clients telling him they are moving out of California, and he is considering it as well. We also have clients who have been moving out of state, so together these experiences are casual indicators that more people are heading for the California exit.

In this article we will share our personal experience with the exodus of people leaving California as well as interactive data that shows the history and recent trends.

Several large companies have discussed plans to move out of California:

California Migration: Who left? Where did they go and why? 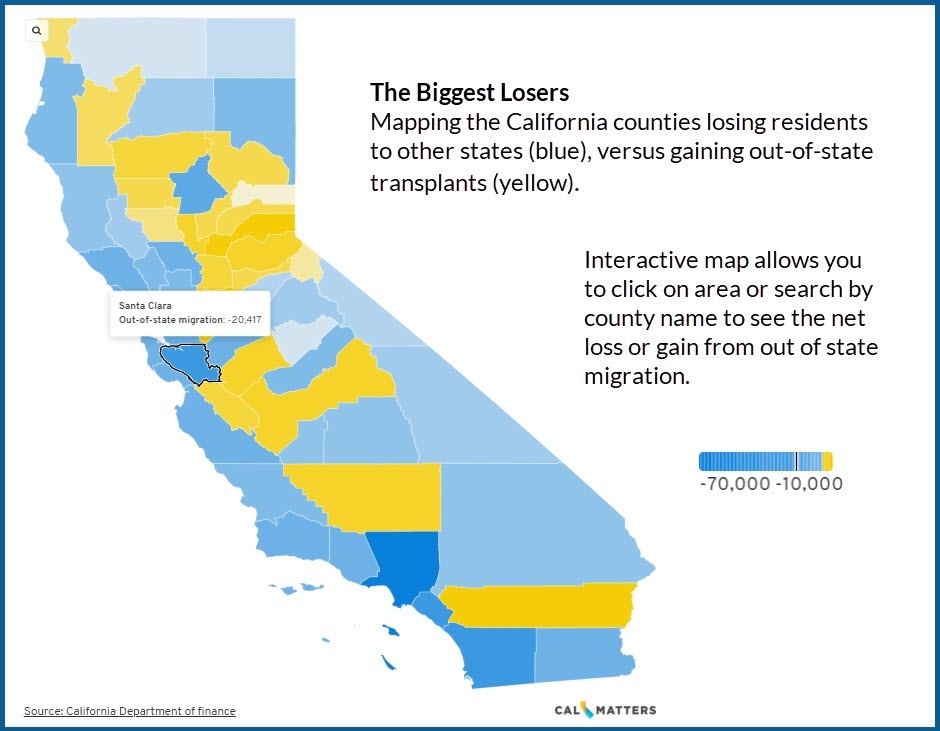 You can interact with the map to understand the specific migration volumes. In our county of Santa Clara, 20,417 more people left the state than arrived, with the greatest exodus in Los Angeles of 97,835 people who left the state. 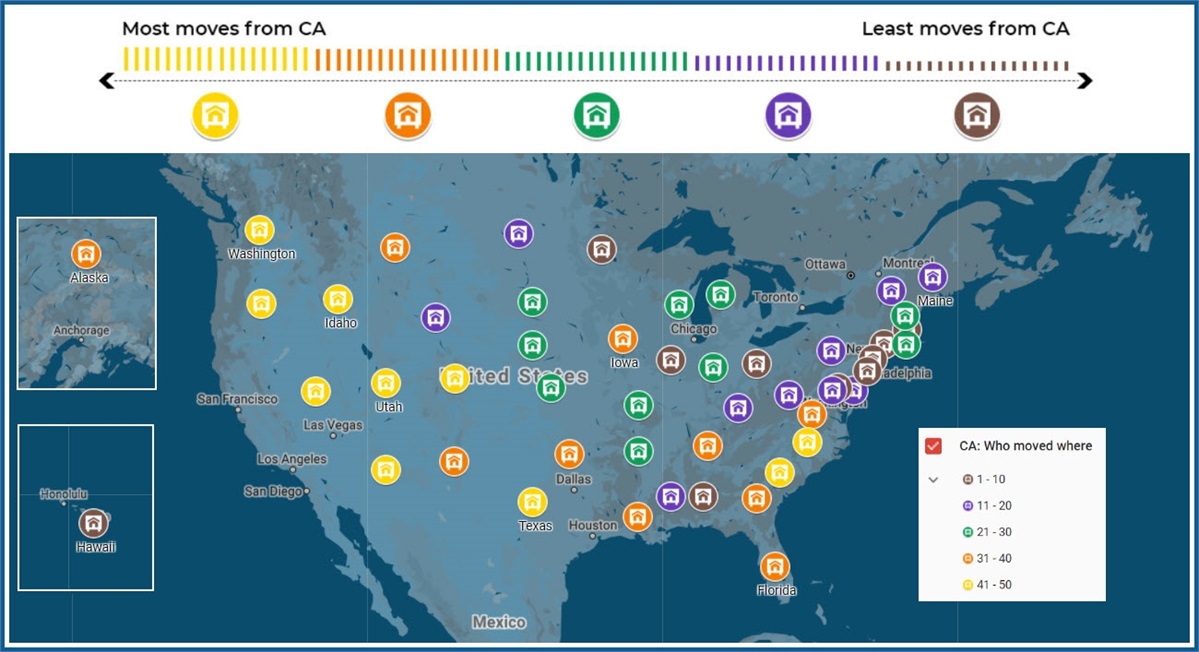 The yellow top tier rankings of 41 – 50, indicate most migrations were to the western states of Utah, Colorado, Idaho, Washington, Oregon and Nevada. Still other people moved further east and south to North Carolina and South Carolina, with Arizona and Texas ranking highest.

Some reasons why people leave California include:

See our February 2021 article "Why Are People Leaving California" where we explore this topic in greater depth. Since we live in Northern California in the middle of Silicon Valley, we provide a first-hand account of the situation.

Is the California exodus a long-term trend?

We are finding the COVID-19 pandemic is accelerating previous trends, such as online shopping. We think that the pandemic may also accelerate the trend of working from home.

With companies approving employees working from home, it has enabled people working for the large California tech companies to move to lower cost regions. It has created a label of “Zoom Town” to describe communities that are well-suited for people to work from home, with a low cost of living and fast internet access.

The Metropolitan Transportation Commission (the group that does the transportation planning for the nine-county San Francisco Bay area) passed their 30-year plan this past week to mandate companies have 60% of employees working from home. In a recent survey, 40% of the tech workers based in Silicon Valley said they would move to a less expensive area if they were allowed to permanently work from home6.

There are lots of reasons to stay in California!

California is one of the most beautiful states. An alternative to moving away is to be more active in government by voting, communicating with your representatives and volunteering. The challenges can be met if we actively work on improving things rather than stand by and watch them decline.

We hope you will increase your participation in improving your community. There is plenty do to do so it’s a matter of finding what suits you best – donate, participate or both!

In an upcoming blog, we’ll explore the reasons people tell us why they still love living in California. Since the Financial Journey Partners team lives in California, we’ll give you our top reasons why we enjoy it here.

6 Business Insider – More than 40% of Bay Area tech workers would leave the area for somewhere less expensive if they were asked to work from home forever, a new survey found