There was weakness in the U.S. stock market in December 2021, which continued into January and February 2022. We think there are several contributing factors including the jobs numbers, and rising inflation. There have also been many articles published by the media about the U.S. economy and the plans for rising interest rates.

Then there is the invasion of Russian troops into Ukraine and the additional buildup of Russian military along the Ukrainian border, presenting a situation that changes daily.

We think these factors are related and will continue to be in the news throughout the year and likely contribute to a more volatile stock market.

In this blog, we will discuss:

The payroll company, ADP, reported on February 2, 2022, that based on their data, in their January 2022 ADP National Employment Report, the nonfarm private-sector employment in the U.S. decreased by 301,000 in January, on a seasonally adjusted basis1.

"The labor market recovery took a step back at the start of 2022 due to the effect of the Omicron variant and its significant, though likely temporary, impact to job growth," said Nela Richardson, chief economist, ADP. The majority of industry sectors experienced job loss, marking the most recent decline since December 2020. Leisure and hospitality saw the largest setback after substantial gains in the fourth quarter 2021, while small businesses were hit hardest by losses, erasing most of the job gains made in December 2021."2

The data used to develop the ADP National Employment Report was derived from ADP payroll data, which represents 460,000 U.S. companies employing nearly 26 million workers in the U.S. The December total of jobs added was revised from 807,000 to 776,000.

The U.S. Bureau of Labor Statistics (BLS) reported on February 4, 2022, that the U.S. economy gained 467,000 jobs in January, 20223. So, in two days the number of jobs was decreasing by 301,000 and the other then increasing by 467,000. This is conflicting data and causes uncertainty in the market. When this number was released, the Biden Administration and the media widely reported how strong these job numbers were and the strength of the economy.

So how were these numbers so different, ADP reporting a large loss of jobs and the BLS reporting a large increase in jobs? Perhaps there are some answers when we look at the details of the BLS jobs report. The report states the following:

“In accordance with annual practice, the establishment survey data released today have been benchmarked to reflect comprehensive counts of payroll jobs for March 2021. These counts are derived principally from the Quarterly Census of Employment and Wages (QCEW), which counts jobs covered by the Unemployment Insurance (UI) tax system. The benchmark process results in revisions to not seasonally adjusted data from April 2020 forward. Seasonally adjusted data from January 2017 forward are subject to revision. In addition, data for some series prior to 2017, both seasonally adjusted and unadjusted, incorporate other revisions.”

Clear as mud, right? Some analysts have speculated that these revisions contributed to the large difference between the jobs numbers from ADP and the numbers from BLS. As we get the numbers over the next few months, we may find out which numbers were a more accurate reflection of the state of the economy4.

It is important to know if the economy is adding or subtracting new jobs to understand the state of the economy and what actions might be taken this year by the Federal Reserve to raise interest rates.

Inflation Moved from Transitory to Problematic

In the Summer of 2022, Federal Reserve Chairman, Jerome Powell, called the increase in inflation “transitory”, meaning he expected it to only be elevated for a short period of time and then to decline. Inflation continued to increase through the latter part of 2021 and consumers noticed the increasing prices for many of the goods and services they purchase.

Chairman Powell announced in December 2021 that it was time to retire the word “transitory” when describing the elevated inflation rate.

The Inflation Rate as measured by the U.S. BLS reported on February 10 that over the past 12 months, the Consumer Price Index (CPI) increased 7.5% before seasonal adjustment, which is the highest level in decades. 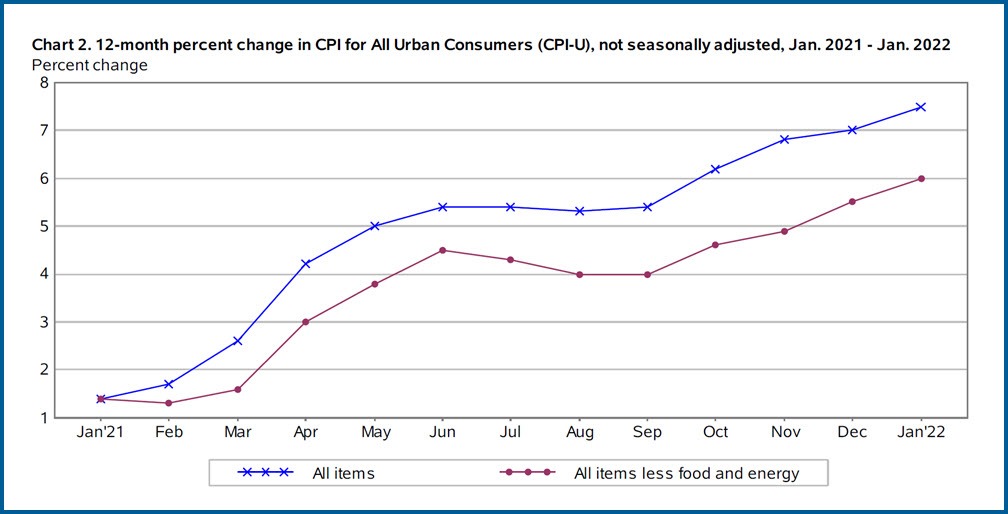 The inflation rate is another one of the statistics the U.S. Federal Reserve uses to determine whether the economy is overheating, and whether they should raise interest rates.

The Federal Reserve has a target of keeping inflation of about 2%, so inflation is running far above their target. High inflation and low unemployment are signs of a strong economy.

How strong is the U.S. economy? The new jobs numbers are an important indicator of the strength of the U.S. economy, so that is why it is important to know if the economy is adding or losing jobs, as discussed above.

There are three large actions the Federal Reserve can use to slow down an over-heated economy by reducing the amount of money in circulation:

Analysts estimate that by the end of 2022, the Fed Funds interest rate could rise to 1.00%, or even as high as 1.75%, and the largest increase to occur in one year. The 10-year treasury has already started to rise in anticipation of these short-term rate hikes, with the 10-year treasury going above 2%, and he interest rate on 30-year mortgages has also started to rise. 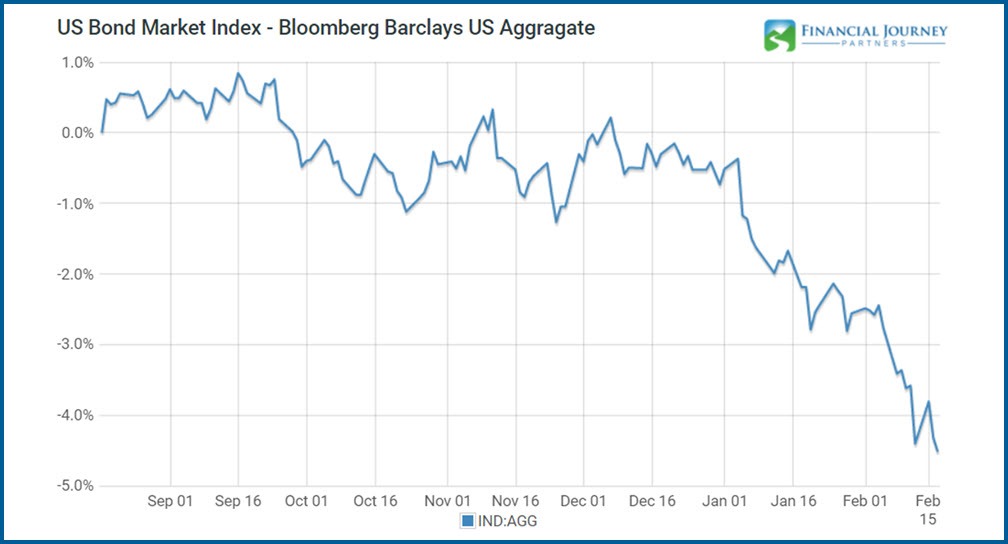 Impact on the Stock Market

The S&P 500 has enjoyed a significant increase since the Federal Reserve started buying bonds in March 2020, when the economy was shut down due to COVID. 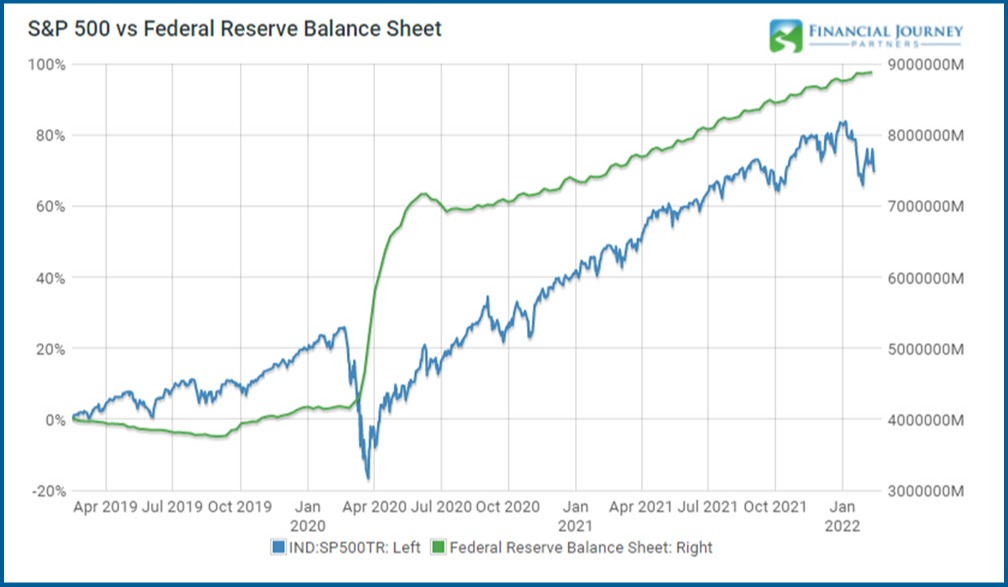 We think these concerns have contributed to the recent weakness and increased volatility in the U.S. stock market.

The graph below shows that the U.S. stock market, as measured by the S&P 500, started going up at a faster rate after the COVID Pandemic started. 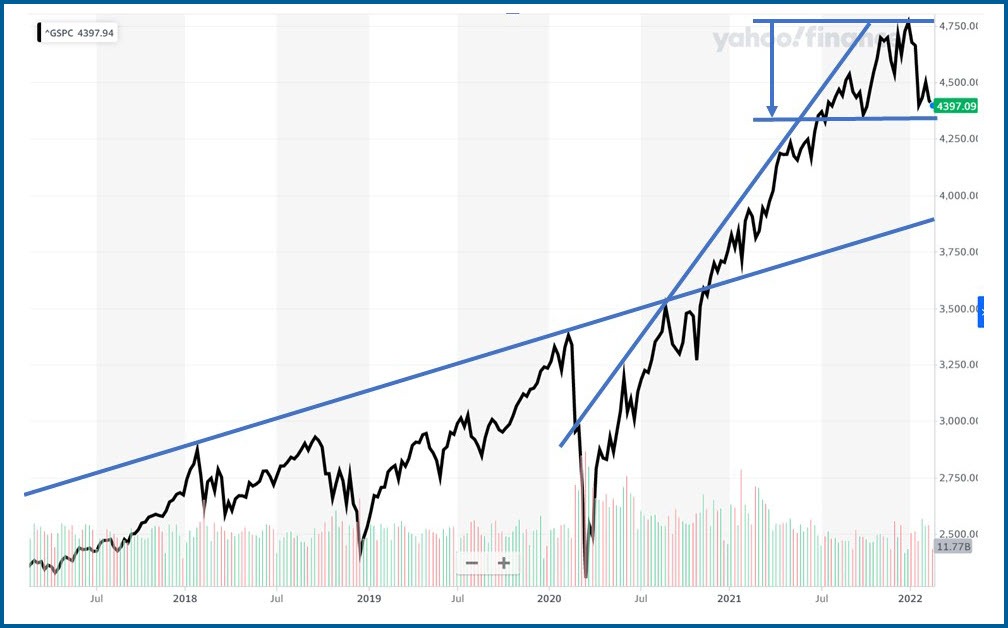 The stock market may have gotten a little overdone to the upside and was due for the pullback that we saw in January 2022.

Taking a Closer Look at the Market

There have been some companies that have experienced significant pullbacks over the past 6 months losing most or all the gains that have occurred since the start of the pandemic.

Here are a few examples:

In addition to the companies above, there are also many large, blue-chip companies that are down more than 20% from their highs in 2021.

We are doing our best to steer clear and avoid these potholes in the road to smooth out the ride for your portfolios through these bumpy times.

As we watch the daily news and compare that to the moves in the stock market, we can see that news about the recent events with Russia and Ukraine is also having a significant daily impact on the U.S. and global stock markets.

The recent invasion of Ukraine by Russia, and the corresponding retaliation of sanctions on Russia by the U.S. and NATO countries in Western Europe, have caused concern by investors and weakness in the markets.

It is difficult to know what will happen here, but we think war has so many negative consequences and we hope that a wider conflict can be avoided. History has also shown us that these types of geopolitical events can be limited to a short-term impact on the stock market.

The U.S. Economy is Strong 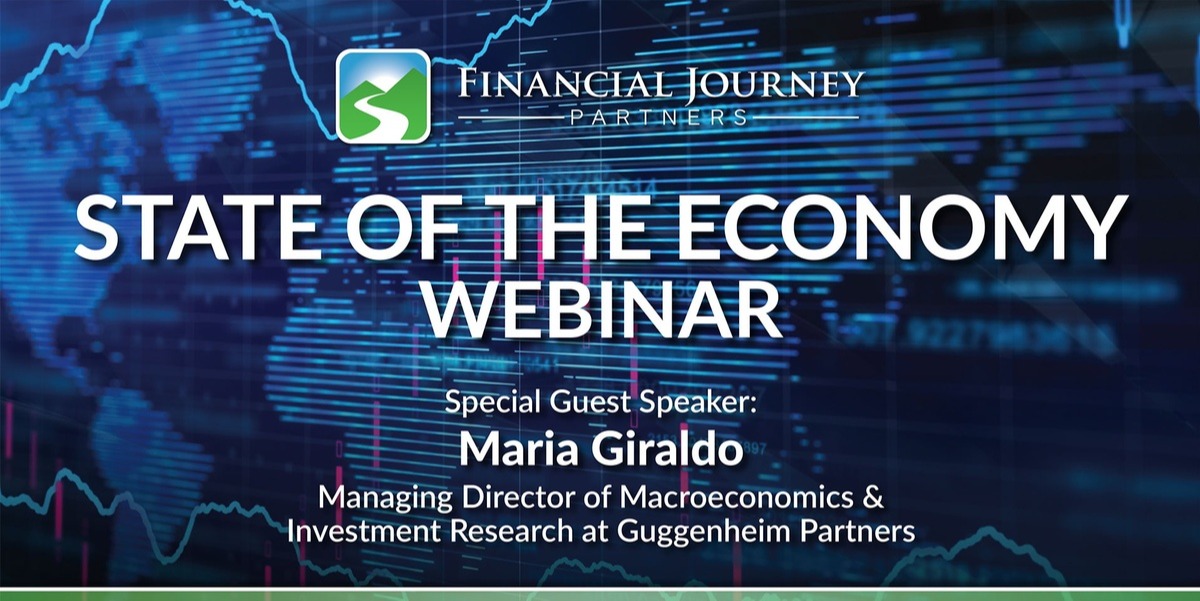 While there are risks that are impacting the stock market, on the positive, the U.S. economy is strong, and we believe it will remain strong through 2022. Watch our State of the Economy Webinar for the views of guest speaker, Maria Giraldo, CFA, from Guggenheim Investments.

We notice the stock market moving up and down daily based on the risk factors such as:   economic data like jobs and consumer sales, inflation, rising interest rates by the Federal Reserve and the threat of war in the Ukraine. We expect these factors will continue to cause volatility in the stock market through 2022.

Smoothing out the Ride

The U.S. stock markets showed unusually low volatility in the second half of 2020 through 2021. There was not a single correction of 10% or more in the S&P 500 during that period.

The changes in the economy and Federal Reserve policies have already resulted in an increase in stock market volatility in 2022. We think this increased level of volatility is likely to continue throughout the year.

If you have questions on the topics in this article, or would like to discuss your portfolio, give your Wealth Manager a call or consider a complimentary initial consultation with Financial Journey Partners.